Following a little technical library which deals with the most important points of suspension geometry. Almost any wheels has a different offset or ET. The ET has quite a big influence on how a car handles and looks. And it has (or better because it has) a big influence on the suspension's geometry.

TECHNICAL: "Offset" and PCD - what does it all mean?

First off all: have a look at the following cutaway drawing of the Mini's suspension: 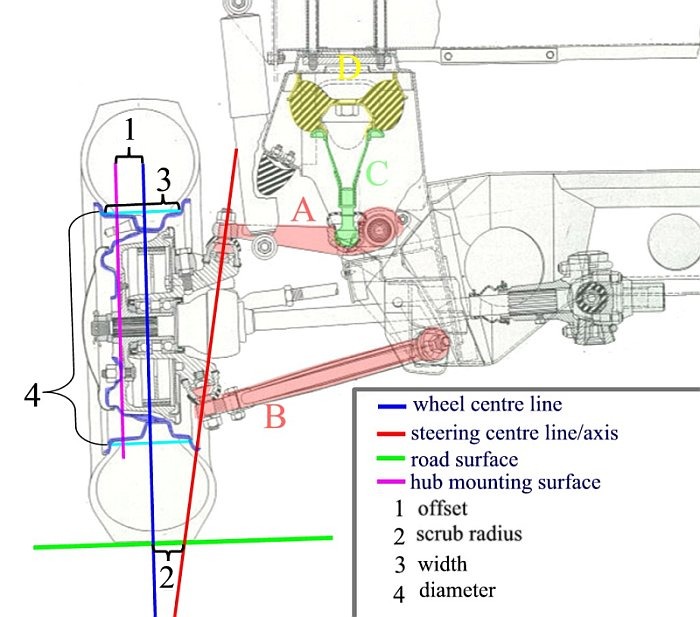 The offset of a vehicle's wheel is the distance between the centerline of the wheel and the plane of the hub-mounting surface of the wheel. It can thus be either positive or negative, and is typically measured in millimeters. Offset has a significant effect on many elements of a vehicle's suspension, including suspension geometry, clearance between the tire and suspension elements, the scrub radius of the steering system, and visually, the width of the wheel faces relative to the car's bodywork. 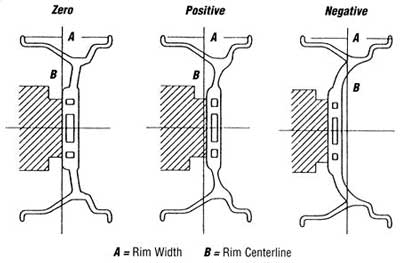 This graph shows what it means.

You can see that the offset changes a vehicles track width. Disc brakes on the front have again a 1" increase of track per side over drum brakes! In most cases where wheels wider than 5" are used, it is neccesary to cut the Mini's front wings, if disc brakes are used. No matter if they are 10" or 13" in diameter, against the prevalent opinion that only 13" wheels require the wings to be cut out. In fact the wheel's diameter does off course play a role - but only a minor. The important variable is the ET.

This is however no fast rule. But it is good as a rule of thumb because any wheel will need a certain offset to stay clear of suspension parts, like the shock absorbers & brakes, so with increasing width it's neccesary to decrease the wheel's offset.

The acronym "ET" comes from the german word "Einpresstiefe" ('Depth of insertion') and established internationally.

The scrub radius is distance between the Steering Axis Inclination (SAI)and the center of the wheel where both would theoretically touch the road. The steering axis is the line between the top pivot point of your hub and the lower ball joint of your hub. On a MacPherson strut, the top pivot point is the strut bearing, and the bottom point is the lower ball joint. On a suspension using upper and lower control arms, the pivot points are where the upright connects to the control arms. The inclination of the steering axis is measured as the angle between the steering axis and the centerline of the wheel. This means that if your camber is adjustable within the pivot points (i.e. Volkswagen) you can change the SAI, thus alter your scrub radius, that alter the width and offset of tyres you can safely run on your car.

The net effect of running an offset LESS in the positive is poor steering control and it develops what is known as "tram lining" over uneven surfaces (The wheels pull to either side. This also encourages instability at high speed. Such effects can be lessened by setting front wheel alignment to neutral, but in many cases it is simply unwise to use a wheel that alters the scrub radius of a car. This is why some insurance companies will not pay out on an accident involving a car that has after market wheels.

Large positive values of scrub radius, 4 inches or 100 mm or so, were used in cars for many years. The advantage of this is that the tire rolls as the wheel is steered, which reduces the effort when parking. This also allows greater width in the engine bay, which is very important in some compact sports cars. Scrub Radius is very important in regards Wheel Alignment and steering stability.

If the scrub radius is small then the contact patch is spun in place when parking, which takes a lot more effort. The advantage of a small scrub radius is that the steering becomes less sensitive to braking inputs, in particular.

An advantage of a negative scrub radius is that the geometry naturally compensates for split mu braking, or failure in one of the brake circuits.

For an illustration look here: http://www.miata.net/garage/offset.htm

The diemnsions of a wheel are measured on the tyre's bead/wheels 'shoulders', not on the outer rim.

This graph may help you to determine where to take measurments: 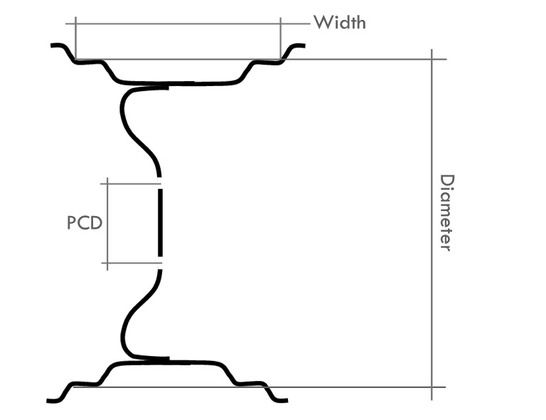 The dimenions of a wheel are always given in inch. There's a fast code system to precisely determine a wheels dimension and characteristics. Usualy it is widthxdiameter" in inches. But there are more acronymic codes somtimes. The following example is explanatory for those codes:

Those acronyms stand for the following:

Most common (on other cars) is a circle of 4,5" and 100mm. Eventhough 100mm seems a minor difference to the Mini's 101,6mm it is strickly recommendet to NOT USE wheels with a 4x100 PCD on a Mini!! It will stress the wheel studs and the may suddenly fail! You may risk your life and the lifes of others!!!

Some pictures on this site taken from mini-bande Stuttgart, whose pages seem to have gone.

This site uses cookies. By continuing to browse this site, you are agreeing to our use of cookies. More Details Close